GREAT PLACE FOR A WORKING GRID 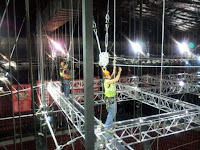 What an Opportunity for In-House Production to work with some of those largers companies when it comes to Construction, Install and Rigging Design. I would like to say Thank You to Nicholas Gushue with Matrin Harris Construction for invinting us to be a part of the NEW GRID INSTALL at the Thomas and Mack Arena. I would also like to say Thank You to David Piccola with Atlanta Rigging Inc. Atlanta was the Design behind the 20" by 24" Aluminum Grid,  how and where it hang above the building cable knuckles, and supervision to install their design. 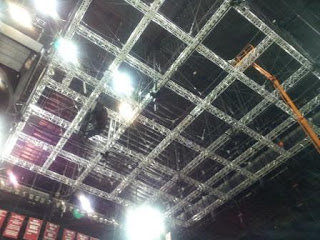 Nicholas then came to In-House Production, a local Las Vegas Stagehand Labor Company that is licensed by the State of Nevada Contractors Board, with 2 Contractors Licenses to put together that Special Rigging Crew, work with Atlanta Rigging Inc for the install. In-House Production had an estimated 20 Riggers, Loaders, Pushers and Ground guys working throughout the job.

Atlanta Rigging Inc sent out Scott Ward to work in the air and David Middleton stayed on the ground to make sure the right parts went up to the crews in the air. Both did a great job. Some of the parts were big and heavy. Not our normal event install. Things like 80 pound Special Custom Built I-Beam Clamps, 7/8" and 1" Aircraft Cable, Turnbuckles the size of small cars. 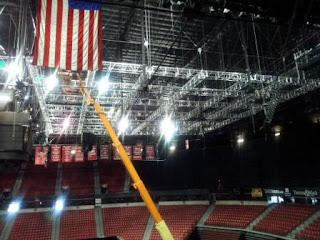 Atlanta Rigging's design looks and will work great. It will take a bilding that was hard and ugly to rig in, to simplifed and easy to rig from, for that event. Half of the building is simplifed. The other half is still hard and ugly. 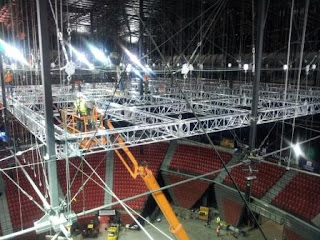 Thank you Martin Harris, Thank You Atlanta Rigging, Gread Job. Thank You Matt Ewing for taking care of us as we used your building, and Thank You to the Crew of In-House Production for a great job.


Posted by In-House Production at 12:16 PM No comments: 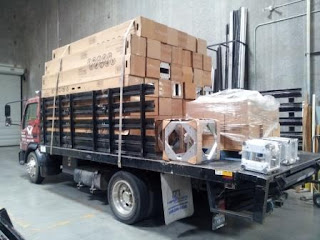 In-House Production will also be changing all of In-House Production CM Chain Motors from Double Hubble to 7 PIN SOCO Cables. We tryed something new. We have Pelican Case 8 Way Controllers from Applied Electronics heading our way with 25' and 100' Remote Extension. Peleican Case will be a change from the ATA Cases we have had. Hope it works. When done, Motors and Controllers will be able to work with several other companies in Las Vegas who have changed over to 7 pin cables.

Speaking about ATA Boxes. We have had several of our 1/2 Ton CM Chain Motors without Cases. So as the Last Part of the changes, we ordered new ATA Cases for our CM 1/2 Ton Motors. We stayed with out color and ordered ATA Motor Cases in YELLOW. YES YELLOW.  We call it SAFETY YELLOW. --SAFETY FIRST-- Cases have been ordered from Pro-Pak in Las Vegas. They work with us. We are always changing or trying new things, so we went from a 2 Chain Motors Per Box to 3 Chain Motors. The boxes will stay the same size outside as our Double Brake Chain Master ATA Box. This works for stacking and storing or shipping. It great when it all fits. 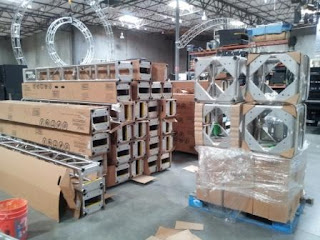