IN-HOUSE PRODUCTION WAREHOUSE SPACE IN USE.

Payroll Service is an accounting business whose main focus is the preparation of payroll for other businesses. Such firms are often run by Certified Public Accountants, through a typical payroll processing company will refer to itself as a service rather then a CPA firm, to distinguish its payroll service from the general tax and accounting service that are generally not offered by a payroll service. The typical client of a payroll service is a small business - one just large enough for payroll to be complicated to the point of a hassle, but still small enough to not merit its own full-time payroll department.  The tasks that can generally be expected of just about all payroll serves are:
1: Printing of employee pay checks on time for payday
2: Appropriate calculation of withholding of federal, state, and local taxes
3: Calculation of payroll taxes to be paid by employer (such as Social Security and Medicare)
4: Filing of quarterly and annual payroll reports
5: Depositing of withholding amounts with tax authorities
6: Printing and filing of year-end employee tax documents such as Form W-2

A "Payroller" is a Labor Provider that has signed a contract (CBA) with a Union. The payroller is responsible for all employees working under the CBA, W-4, I-9, Sign-In Sheets, Sign-Out Sheets, Work Place Safety, Audits from the Union amd/or Insurance Companies, Dealing with Employees and there Problems (HR), Dealing with the Union and its Officers when they believe the CBA is not being followed to there interpretation of the Agreement. This is one reason why the Payrollers cost is more then a Payroll service. A Payroll Service has no interest or need to deal with the Employees, he Unions and its problems.

If the Employees Payroll Checks are Wrong, Union Benefits are Wrong, Hours and Rates aare Wrong, this is NOT the Payroll Services Problem. They did NOT Sign the CBA. You are NOT there Employees. Talk to your Employer.

Having inside working space is a great thing. Being able to build our truss system without dealing with the weather works. The system below is 42' by 34' by 25' high. we added 5' off the front for front of stage lighting. We are making some clever grapples for inter truss to hang from. Soon to the blog.
As you can see in the photos, we have a 20' and 10' circle truss hanging. All our Rigging Hardware and Staging is RENT ABLE. The one thing we like doing is providing LABOR. We can supply all your show/event LABOR. We specialize in RIGGING, STAGE CARPENTERS, LIGHTING TECHS AND AUDIO VISUAL. Payroll / Payroller is what we do, it is all about supplying qualified labor for your EVENT.

YOUR ENTERTAINMENT SUPPORT STAFFING AND SUPPLY COMPANY , STAGEHAND LABOR / PAYROLL SERVICE; That's Not Where It Ends..........

If you have a need for Union Stage Labor or Rigging and Staging Hardware, In-House Production is the company that are ready to work with you and your staff on that special event.

How does the Flower photo tie in with Payroll, Rigging and Hardware. Give me a call at 702-631-4748 or email me at pat@ihplabor.com and I will give you the low-down on the Flower.
Posted by In-House Production at 3:27 PM No comments:

SEVERAL OF THE CREW THAT WORK THE PENN & TELLER SHOW 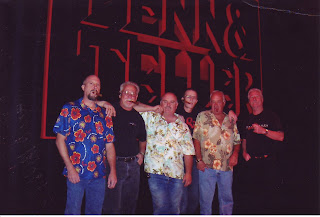 Many years ago in a far far away town, there was a crew that believed FRIDAY was HAWAIIAN SHIRT DAY, working as a team was how things were, making sure the show was flawless, and at the end of the night, sitting around with a GOOD CIGAR, and FRIENDS, GOOD FRIENDS. We like working the Penn & Teller Show. This is where In-House Production started, and after 10 YEARS, we are still working the Penn & Teller shows 5 nights a week.

This photo is from a long time ago. Some of the crew in this photo have retired and moved on. Then  replaced with new faces, but most are still working the Penn & Teller show every night. This is less then half the crew  that works the show 5 night a week.

I have to say that working the Penn & Teller Show is one of them jobs that come around once. Most of the crew in the photo have worked with Penn & Teller over 15 years. Working their stage show, the TV shows, or helping with the props in there shop. I started with Penn & Teller back in 1992 when they first showed up in a strip showroom in Las Vegas. It has been a great job from day 1......

Hawaiian shirt day has moved to Wednesday. Thursday and Friday are dark days. Its a GREAT SHOW!!!!!!!!!!!
Posted by In-House Production at 7:55 PM No comments: