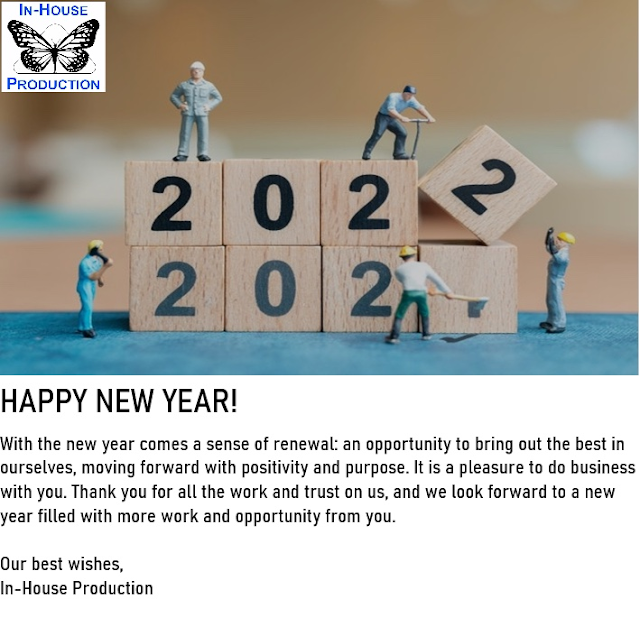 Posted by In-House Production at 3:19 PM No comments:

DISCLAIMER: Before I go too far into what I say, this could be all wrong, so take it with a grain of salt.

Withdrawal Liability is an Exit-Fee Triggered when an Employer Completely STOPS Contribution to a Union's Multi-Employer Defined Benefit (DB) Pension Plan - or when an employer reduces its annual contributions beyond certain percentages over time.

Withdrawal Liability is a creation of Statute and Subject to STRICT Enforcement, meaning there is very little subjective application to the process. Withdrawal Liability assessments are typically significant and can, and often do, exceed the million-dollar threshold, regardless of the fact that an employer may only contribute to the Union pension Plan on behalf of a small number of Union Employees.

So what does this mean for a union member that started a business, signed a union contract because it was the right thing to do. I have also paid all Union Benefit Obligation over the many years and owe no one. If the Union and the Pension Fund was under the classification as an Entertainment Fund, Entertainment Industry (means theater, motion picture, radio, television, sound or visual recording, music, and dance and such other entertainment activities as the corporation may determine to be appropriate) which they are not. Strange to have a stagehand union, not be an entertainment union. Local 720 supplies more convention labor than entertainment labor. May 720 should be called a Convention Union.  Those Personal Service Contract (PSC) employers that have signed an IATSE Union contract in Las Vegas as I have, will find out that the Stagehands Union Pension Plan is not an Entertainment Plan. Because of this, everyone of the PSC contractors is subject to Withdrawal Liability Fees.

As an owner of a stagehand business providing stagehand labor for shows, events, conventions and 99% of all the stagehand union crews I use are temporary, on-call, or per job employees. All the employees I use also work for a group of union labor providers. One employee can have 15 W-forms at the end of each year.

What happened back in 1974 was the government wanted more control over the Private Pension Plans so Congress passed the Employer Retirement Income Security Act is known as (ERISA).

If a DB pension plan is not fully funded and has insufficient funding for its members through the member's retirement years, ERICA funding rules kick in and require the employers to make sure the funding is there through the life of those employees that worked for the company. This is Withdrawal Liability.

This all started because of Studebaker closing and the workers lost all benefits accrued during their employment. I don't understand how In-House Production (IHP) and the work, IHP does with on-call labor compare with Studebaker, but I guess it does.

Look for more in the coming future on Withdrawal Liability from IHP.

Posted by In-House Production at 4:28 PM No comments:

In-House Production (IHP) had a call from a client asking for 5,500 lbs of ballast weight. Under normal circumstances, this would be simple. IHP would deliver the weights, unload them with a forklift, and put them into place. This was not Normal. 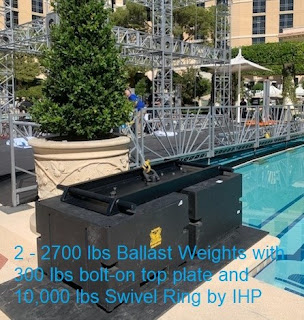 Then we added the top plate and bolted the 2 ballast weights together to make one (1) 5,700-pound ballast. "WOW". This happens 4 times at all four corners. We gave the engineer the weight they ask for plus more. 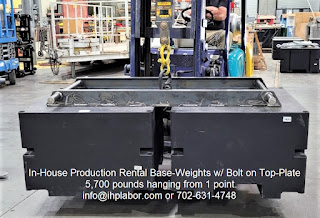 Posted by In-House Production at 4:48 PM No comments:

"WOW". I have to say that today was a very exciting day. The very first Zoom meeting with potential STARS customers. After seven (7) years in development and a countless amount of working personal hours, In-House Production is ready to show it to the world. THIS IS EXCITING... 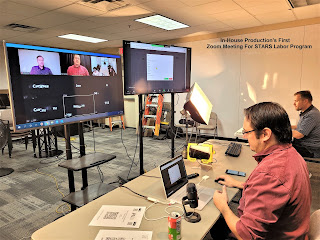 I have to say finding the best way to do this Zoom Meeting was a challenge and what will work the best. We have Cameras, we had audio speakers, we had microphones and we dragged out some of our monitors and TV stands, then added some old lights, and set up some tables. This is the day. 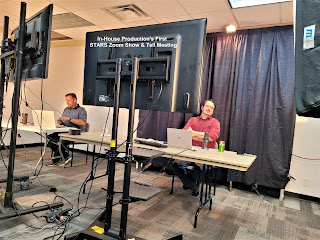 The interaction between Ben and Raleigh as they talked about STARS was incredible. Ben knows the STARS program better than anyone and Raleigh knows how to use it on the job site. What a team. When it comes to Show & Tell, there are non better people to talk about STARS than Ben & Raleigh.
This could have been the Ben & Raleigh's talk show hour on your AM dial, and our hosts today are Ben & Raleigh. Today's talk show subject is STARS.  (Stagehands Time Attendance Reporting System).
If you want to know more about Ben or Raleigh and what STARS is all about, let Ben and Raleigh show you around.
Contact us at info@ihplabor.com or call us at 702-631-4748. 8-6-2021

Posted by In-House Production at 6:01 PM No comments:

In-House Production is glad to have those that want to keep learning and never stop training. Mr. Jeff Morgan and Mr. Ricardo Serrano Went to a 2 day CM Motor Class. 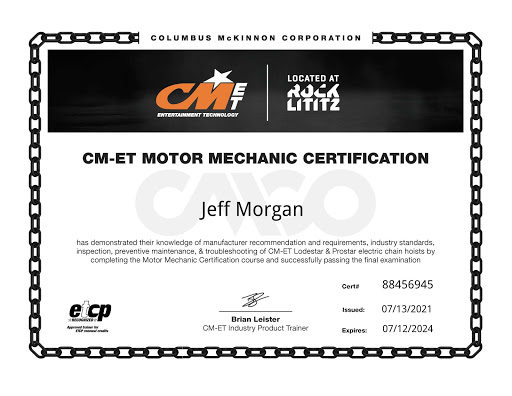 Jeff and Ricardo learned a lot. Ricardo has been repairing CM Chain Hoists for over ten (10) years. Ricardo likes staying on top of all the changes CM does to the Chain Hoists. Every couple years they add, remove or change something and the only way to know what changed is to take classes. 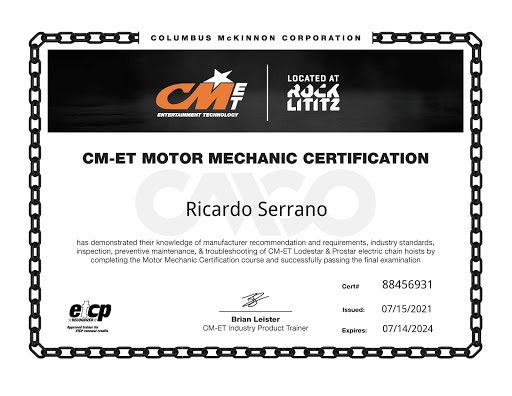 CONGRATULATIONS to Mr. Jeff Morgan and to Mr. Ricardo Serrano.

If you are in Las Vegas and need motor work, call In-House Production (IHP) and ask for one of the Talented Motor Guys. 702-631-4748 or info@ihplabor.com

Posted by In-House Production at 10:27 AM No comments:

WHAT DOES "STARS" HAVE TO OFFER YOU. TAKE A LOOK BELOW AS THIS MAY HELP WITH UNDERSTANDING WHAT "STARS" HAS FOR BUSINESS. 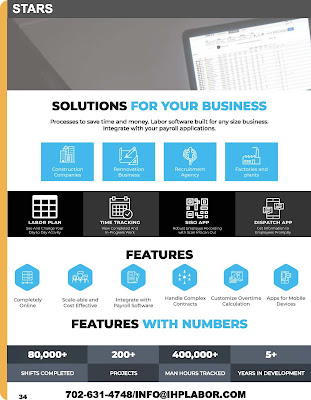 "STARS" IS MUCH MORE THAN HAVING A DIGITAL TIME CLOCK. IT'S LIKE HAVING A TIME CLOCK ON STEROIDS.... 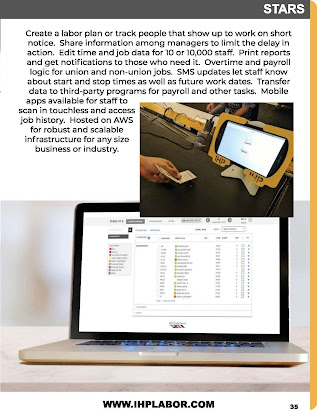 WE TOOK THE SIGN-IN TABLET AND CHANGE IT TO A BAR SCAN CODE SO WORKERS CAN USE THEIR SMARTPHONES TO SIGN IN AND OUT USING THE APP. ALSO WITH "STARS" SIGN IN APP, THE WORKERS CAN LOOK AT THEIR PAST JOB HISTORY 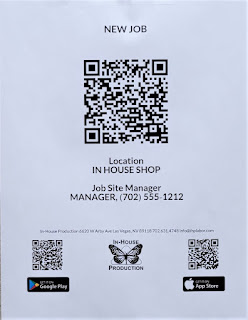 GIVE IN-HOUSE PRODUCTION (IHP) A CALL TODAY TO FIND OUT HOW IT CAN HELP YOUR LABOR BUSINESS. 702-631-4748 OR INFO@IHPLABOR.COM

Posted by In-House Production at 4:03 PM No comments:

Hang Audio Speakers or Lighting Equipment from your Tree Trunk

How do you install Audio Speakers or Lighting Instruments from Tree Trunk of any Size or Type of Tree? Is the use for  Commercial or Residential applications? Give In-House Production (IHP) a call for your Custom Tree (Hugger) Hanger Frame 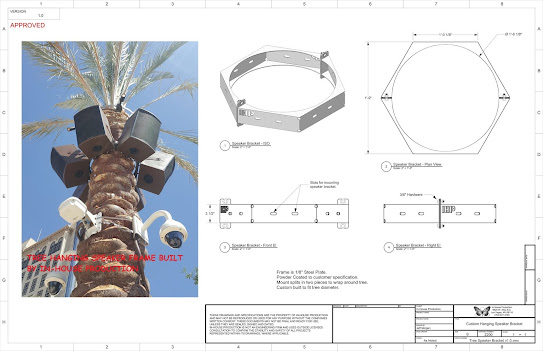 The Tree Hugger Frame comes in a Variety of Sizes to meet your Tree's Needs. Just take a string and go around the tree with the string at the location you would like the Speakers or Lighting to hang. Send us your string or measure the length of the string and let us know. IHP will custom build your Tree (Hugger) Hanger Frame to fit your Tree Trunk Size.
Give IHP a call at 702-631-4748
or
Email us at info@ihplabor.com
In-House Production
6620 W Arby Ave
Las Vegas, NV 89118

Posted by In-House Production at 10:04 AM No comments:

New App for the "STARS" Labor Management Program. Simplify your Crews Sign in and Sign-out operations by using their Smartphone(s). Not only can they Sign In or Out they can also bring up their  Past Work History. Click on the name below for the VIDEO. 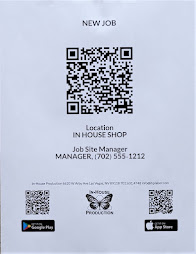 If you are looking to keep better track of your crews and their work time, give us a call as we can help with the "STARS" program and its NEW app. "STARS" Labor Management Program offers you or your company a simplified way when it comes to tracking LABOR.

Posted by In-House Production at 2:40 PM No comments:

Steel Cases that have several uses. (1) removable inter cradles can be made for any size or manufacturer's hoists. IHP has in stock CM and Chain Master for the crates in the photos are built for those hoists from 1/4-ton to 2-ton hoists. 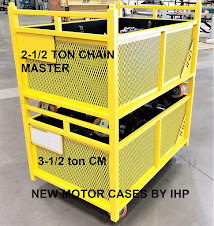 The steel cases are built with several different sizes and thicknesses of steel tubing for long longevity. 2" x 5" swivel casters add to the cases for easy rolling on concrete or carpet. 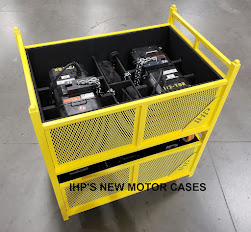 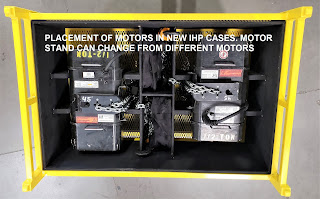 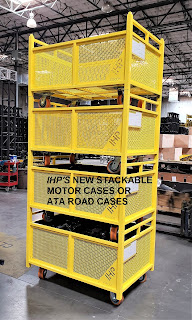 Forklift friendly and easy to stack for storage or truck loads. Most any color is available and have your name and bar-code number cut into the steel for recognition. As you can see, Yellow is our color. 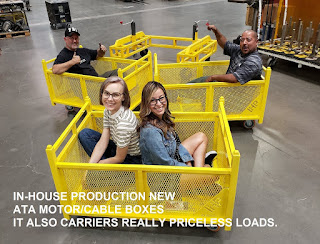 Give In-House Production (IHP) a call for more information as to our Motor/Cable Crates.

Posted by In-House Production at 10:50 AM No comments: