LET IN-HOUSE PRODUCTION HELP YOU WITH YOUR PLATFORM/STAGING NEEDS. 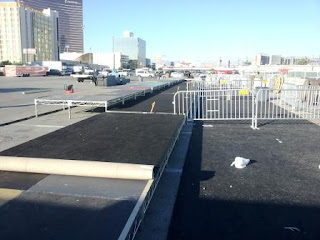 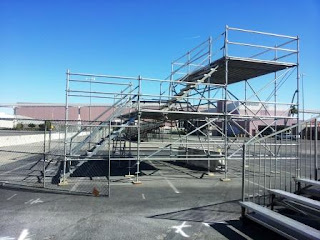 
them a great place to watch the race. In-House Production supplied 336' of platforms 12' wide and 12" high and then 336' of platforms 24" high by 12' wide. This was a nice two (2) tier platform with front step-up's and handrails. Source 1 Events then covered the platforms with Tents. 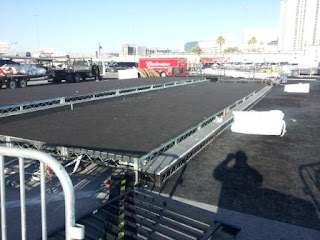 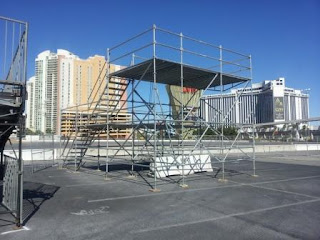 FOR INFORMATION ON WHAT IN-HOUSE PRODUCTION MIGHT HAVE FOR YOUR NEXT EVENT, GIVE THEM A CALL AT 702-631-4748 OR EMAIL THEM AT INFO@IHPLABOR.COM.

Posted by In-House Production at 6:19 PM No comments:

RENTAL TRUSS FOR YOU 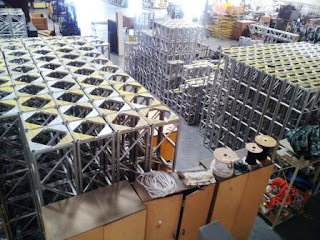 One shoot for your next rental needs

SHAKESPEARE IN THE PARK. WHAT A GREAT WAY TO SPEND A OCTOBER NIGHT. Sitting in a Henderson city park with Friends and Family and watching local actors and actresses perform SHAKESPEARE. What could be better.

HENDERSON PARK & RECREATION working with AVI and In-House Production to bring Lighting, Sound and Staging to the park. Bring lighting to a small part of the Park.

4 weeks, 4 different locations. Friday we started to load in the Staging, Truss System, Lighting and Audio. Henderson Parks & Recreation would bring in Power Generator, Tents for Dressing Rooms and Restrooms. Saturday the Production Company would bring  to the park, all the Sets and place on the stage. By afternoon Rehearsal would happen and at 7pm, the sun is down and the performance would start.

By 11 pm, the performance would be over. Down comes the Lights, Truss, Stage, Sets, Sound and within several hours, the park was empty and we were ready for the next week. We left the park as beautiful and clean as when we first stepped into the park.
Week 4 was at Lake Las Vegas. The first part of Saturday was a Car Show which made for a fast set-up SHAKESPEARE. We made curtain. 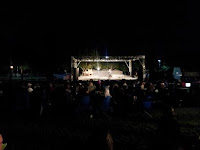 The first week was the largest of the event. This was done on the front area of Henderson City Hall, next to Henderson Convention Center. This large Ground Support System and Staging Set-Up was used for 2 events. The first was Shakespeare in the Park at City Hall. The next week was used for Henderson Barbecue  This filled up Waters Street for the day. Live bands played for the entertainment of those attending the barbecue. Henderson Parks and Recreation knows how to through an event.

VIDEO WALL AND STAND FOR OUTSIDE

Freeman AV from Seattle had an event in Las Vegas. They needed to hang a 26' by 16' Video Wall Outside for this Event. Freeman AV Seattle office called the Freeman AV Las Vegas office to find out who could help with this project. Freeman AV office said to give Pat at In-House Production a call.They should be able to help out.

Freeman AV Seattle call and asked if we have a way to hang their Video Wall outside. We at In-House Production said we have just what you are looking for. A freestanding, 2 leg tower truss system that will work for your event.

In-House Production took Tower Truss Legs which were designed for that down-ward force, 20.5" Spigoted truss to give less flex when holding the video wall, 1 ton motors that fit right-into the 20.5" truss and base-plates that could be nailed to the ground just in-case the wind came up. It is never is windy in Las Vegas. The In-House production crew hung the video wall, lifted the video wall to the proper height needed for the event. Then they places the stage in-front of the video wall for that special out-side look.

At the end of the day. It was a Great look for a Great Event. Weather was nice, Look was nice and it was a GREAT EVENT. Thank You Freeman AV Las Vegas and Seattle for letting us have a part of your event.

It has been a busy time at In-House Production. Here are some photos of jobs we have supplied equipment for and labor to install.


Posted by In-House Production at 4:18 PM No comments: